Did you know?
Only the Two Striper® diamond bur is manufactured with the P.B.S.® diamond-particle bonding process. 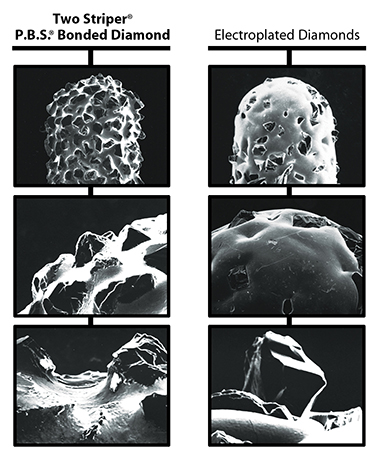 P.B.S.® braze is a bonding process that maximizes the exposure of diamond-cutting surfaces – especially at the tips and upper circumference of the diamond instrument where most cutting occurs. Crystals, placed evenly and precisely in a uniform matrix, are fused permanently to a surgical-grade stainless-steel shank; they are guaranteed not to fall out.

Diamond particles on electroplated tools are trapped mechanically in inconsistent plating layers that can expose either too much or too little of the particle. Some particles are attached loosely and are prone to premature dislodgement. Other particles are buried completely in the plating layer and are unavailable to cut tooth structure, creating unnecessary heat and friction. Electroplated diamonds cut less consistently than Two Striper® diamonds1 and have a shorter product life. The combination of permanent crystal attachment, precise placement at the top and maximum crystal exposure makes Two Striper® faster, cooler cutting and longer lasting.